Top five websites for checking out an area

There’s a huge number of sites you can use for researching an area. It’s at the stage where you don’t even have to visit to have a great idea of what an area is like!
Why don’t you bookmark this page or share with a friend who is looking to buy a house!

Police Crime Maps.
This is a fantastic new resource that tops our list at the moment. Previously the only way of finding out about what happens on a street would have been to visit it at different times, ask the neighbours, and ask the sellers if there’s any issues with neighbours.

Risk of Flooding – insurance is going to get harder to get in areas that flood – so it’s useful to know if you’re at risk. The environment agency allows you to search and see results on a map.
Flooding risk is a concern if you live near a river or stream. If you live in the area you’re searching in you might have an idea of which areas flood, but the make shows you where flood defences have been put in. Always have a look at the area too. Streams that are 100ft below your house aren’t likely to flood without some major catastrophe! However it’s always worth making a note of streams that are close to the property as erosion can steal your garden!

What it sold for before – although not every property’s last sale is listed you can get information on what propertys sold for previously. It’s a great site as you can search by postcode, street name, or area. If the property you’re after isn’t listed then look for the neighbouring ones.. specially if they’re really similar in size. Houses not listed on the data publicly are repos, auction sales and some company purchases – this is because they’re below market value. You should be able to buy the information from the land registry site but it’ll cost £4 a go. It’s interesting to know how much similar propertys have sold for for giving you an idea about what price you should go in at.

Council tax band – worth checking this out before you look at a property – especially if you are concious of the cost of higher bands of council tax. Lots of new builds are rated at C which comes as a shock to many people who move from a similar size band A house. This official site also indicates if a band is due to go up when they sell – ie: if they’ve had work done to make the property bigger than when it sells it might go up a band. 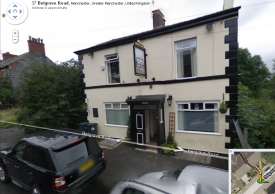 Google Streetview. This is an amazing website for showing you a snapshot of a street when the google car when round. It’s very interesting and covers most of the UK. Private roads haven’t all been done, but the vast majority of the houses in the UK can be seen on it.
Fantastic site to use to see what an area looks like.
You can spend hours going up and down roads with it!
When you get to the maps – type in the postcode, or street name and town. Zoom in a bit to find the right road and then drag the little orange man onto the map and drop him on the roads that show up in blue. Use the mouse to drag around to see 360′, and click on arrows on road to move down the road. You can use the zoom options to zoom in and see more detail.