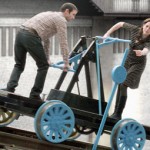 There’s one for a well known high street bank where a couple are on a tracker mortgage and they’re on a track on one of those hand powered handcar. They begin to struggle as it’s going uphill, implying the rates are increasing perhaps. The couple pull a lever and move without fees to a fixed rate mortgage which is on a flat level and therefore easier for them to move along.
Firstly I note that it’s implied a tracker mortgage is hard work. At the moment they shouldn’t be. The Bank of England hasn’t put interest rates up and they’re at their lowest level for hundreds of years.If you can’t manage your mortgage whilst interest rates are this low, then something is clearly wrong!
Secondly the flat level of track is indeed flat, but you don’t see the couple sliding back down the steep hill first. This implies that the fixed rate will cost at least the same as the highest level on the tracker mortgage.
I suppose the benefit would be that you know what rate it is and that it’s not going to go up suddenly if the BOE puts rates up. Will the BOE ever put the rates up though? Savers are desparing that they will!
Perhaps it’s a not so subtle way of this bank pointing out that rates will be going up soon and you should be prepared!

There’s also some silly comment about a squrrel. What’s the relevance of that? Nothing the advert says, but my interpretation would be that the squirrel isn’t relevant as people have not been ‘squirreling’ away money to help them cope during the rough times.

This entry was posted in General and tagged tracker mortgage ad. Bookmark the permalink.