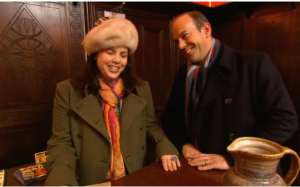 Last night’s episode – a couple looking to buy a Scottish hotel.
They looked at several nice hotels, one was too small and another was mostly pub with the ratio of income being 50% of income from bar drinks, 35% from food and only 15% from rooms ! Luckily Phil pointed out they’d wanted to be hoteliers not landlords!

They should have bought the one that made 60k a year profit a year and was closed 5 months of it too! That sounded like a cushy deal!

Whilst I watched it last night I thought the finance aspect wasn’t touched on very much – where repayment of the loan came into it who knows… if you have to pay your mortgage out of the profit then you have no money to fritter on nice stuff.

I thought buying a “bust” property and keeping on the staff was a stupid idea. Surely it can’t provide for 5 full time wages? I’d have thought the only way of doing it would be to have both working like loonies and trying to get some cheap help. Having a “hotel manager” who’d managed it into the ground sounded like a really awful idea.

He didn’t want to do front of house – so is he a trained chef – one would hope he had some experience! Who knows though – but it certainly made interesting TV for an hour and I learnt a few things too! That Scotland has 2000 hotels! That there’s a less touristy side of Loch Ness and that there’s some pretty nice looking hotels up there!

If you’d like to watch it yourself you can by clicking here and guess what? If you’d like to see their hotel then visit The Royal on Lochan run by Keith and Christine Bettis.