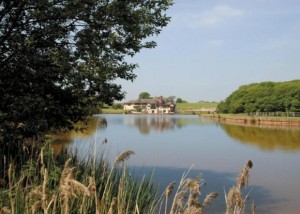 This is a pretty amazing house for sale in Devon! Merehaven Manor was built for Nigel Mansall originally in 1995.
The house has lots of wow factor and is set in a delightful 47 acres of land with beautiful gardens and grounds, the house itself is on the edge of a large lake which is fully stocked with carp!

Kirsty Alssopp was upset by Nigel’s plans to upgrade the kart racing track at nearby Dunkeswell which he’d bought in 2005.
Perhaps her campaign against it was a reason for him leaving the area?