The Secret Life Of Buildings 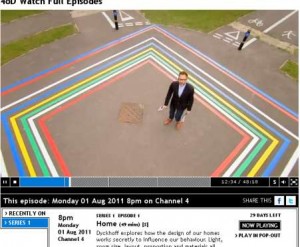 The Secret Life Of Buildings on Channel 4 last night.
Dyckhoff explores how the design of our homes works secretly to influence our behaviour. Light, room size, layout, proportion and materials all have measurable effects on our lives.

I’ve not watched it yet but it’s critical of new builds. I’ve read elsewhere that new builds don’t meet social housing requirements because of room sizes and the open kitchen layout. Apparently social housing requirements are for closed kitchens.
It’s always concerned me that new build estates have so little space between properties, and that they have bizarre designs which mean paths are right next to windows.

Starting at David Adjaye’s hidden house that is mostly black with 3 light wells as a design triumph worries me. It’s not. It’s not a family home. It’s not for anyone who has clutter or likes bright light to read by!
When the house sets down the rules it’s wrong!

New build windows are too small! This affects your bodyclock but modern windows are small! There’s an experiment where they cut down the light in the presenter’s flat to new build levels. With urine and blood tests as well as sleep monitoring and mood rating tests – it’ll be interesting to see the results.

I know what he means – our 50s house has huge windows – something we always moan about when we’re buying curtains as we need huge ones! But it does mean we have massive amounts of light coming in!
The results are worrying – could low light be killing us?
Not only is the low light a problem, but the size is the smallest in western europe.

Room sizes – We buy by number of bedrooms rather than considering the size of the property. The UK has the smallest size of house!
He’s going to a new build property. But the owner moaning about the downstairs bedroom five years on is crazy. She bought it! She could see how small it was – or could she? It’s believed that developers use 3/4 size furniture that makes their room sizes look bigger than they are.
Always measure your biggest items of furniture and work out if they’ll fit in your new build box!
Ceiling heights are also important. Think how high the ceilings are in georgian houses – they’re high and spacious!
Need private spaces and nice outdoor spaces to meet the neighbours in.
They then look at Bjarke Ingels – “Eight House” which is really bizarre to look at! It’s got shops at the bottom, townhouses above, flats above that and then penthouse houses with gardens on the top.
They put the presenter in an ice bath to measure pain tolerance in nasty and nice surroundings.
The golden mean or ration – can make designs look pleasing to the eye
They then go to Maggies cancer centre in London which is built to not feel like a hospital using careful choice of materials.

They then go to Holland to look at the Reitveld Shroder house there. Worth a look at that – it’s a museum!

1960s estate – residents are being allowed to have a say in the design of the replacement estate when the current one is knocked down.
They don’t like the multiple ways in, the small windows, the fact it’s hard to keep clean.
Glass-house community design is helping them.

Build your own –
Would people make better choices if they self- build? Is it expensive? Not necessarily.
They got to a new city of 720 self build plots at Almere in the Netherlands. Ages range from 19-75 so it’s a mixture of people building.
It’s not so easy in the UK though. Land is dear and developers landbank.

Overall a very interesting program about the state of UK housing and how new builds are too small and bad for you!