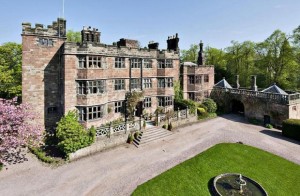 Amongst it’s delightful features are 3 Converted turrets: Thomas Moore, Matthew Craddock, Sister Josephine. It also has a Converted gatehouse plus an Old dungeon.

All in there are 11 suites all of which have spacious double bedrooms and decadent en suite bath/shower rooms.


The castle has a long history as you would expect and was built on the site of an Anglo-Saxon Manor, on the spot where two tributaries of the River Blythe meet. Ernulf de Hesing, as Saxon-holder, who was perhaps driven from the estate during the Conquest. From him it passed to Sir William
de Caverswall who incorporated the tributaries to form his moat when he received a “licence to Crenellate” his Saxon Manor house in 1275

The Castle fell into decay until 1615 when Matthew Cradock, Mayor of Stafford and a wealthy merchant, bought and rebuilt it as a Jacobean mansion in about 1625
It is stunning inside with panelling and ceilings!
It isn’t actually the whole castle though as a small part was sold off some years ago.