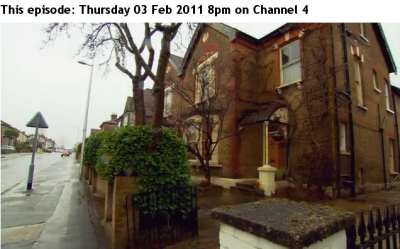 Last night’s Relocation Relocation had Phil and Kirstie helping Sunee and Will Goring, who wanted to bring their young family back to London. Watch again on 4onD
They wanted a big family house and an investment property too.
However their search uncovered a proeprty just across the road from Sunee’s brother’s house that wasn’t on the market but the owner was interested in selling. The couple loved the house – although it did have some eclectic decorating – the black on the stairs was a bit dark. But it was an amazing size house – although they paid £640k for it and they needed to do some work on it.
They declined to buy an investment as they’d spent more on their main home – this was probably very sensible. Phil showed them three flats which got a return of between 5-6%.
The house they bought didn’t involve any estate agents and they offerdd 660 on an asking price of 675. The owners had discussed the fact they wouldn’t be paying any estate agent fees and in light of work needing doing on the guttering they accepted this offer. Kirsty was speechless almost!

This was Series 7 Episode 7

This entry was posted in Property on TV and tagged Relocation, Relocation Relocation. Bookmark the permalink.